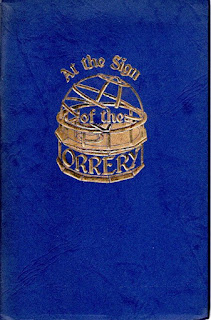 At the Sign of the Orrery: The Origins of the Firm Cooke, Troughton & Simms, Ltd.

The publication date is not given in the book. However, the latest events referred to in the text were in 1959, predating the renaming of the firm to Vickers in 1962. The book is believed to have been published either shortly after the events of 1959, or during the 1960s.

Note: Since the current copyright status of this book and its images is not known, I have only used low resolution reproductions of the images. 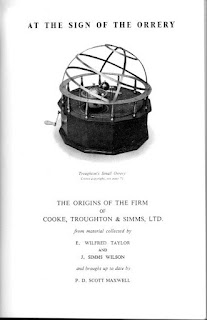 At the Sign of the Orrery gives details of the careers of a number of mathematical instrument makers. These are: John Worgan, John Rowley, Thomas Wright, Benjamin Cole – father and son, and the three founding families of Cooke, Troughton and Simms.

The connection between the earlier makers, according to the authors, was that they had the sign of The Orrery in their trading address – hence the title. There is the suggestion that the addresses, although varying in name, are the same shop. The authors do, however, state: ‘Our story opens in a little shop “Under the Dial of St. Dunstan’s Church in Fleet Street, London’ in the year 1688, and two of the connecting links being of a circumstantial character can hardly be regarded as proved. Thereafter to the present day every link in the chain can be supported by evidence’.

John Worgan2,3,5#451: Mathematical instrument maker, trading Under the Dial of St. Dunstan’s Church, Fleet Street, London, and specialising in surveying instruments and dials. He was freed of the Grocers’ Company in 1682, and records place him working in Fleet Street between 1685 and at least 1700, as well as Fetter Lane in 1693. A Gunther’s quadrant made by John Worgan is in the Science Museum, London. Other examples of his work include compass dials and circumferentors. According to the authors, his premises were taken over by John Rowley. However, while this is confirmed in Reference 3, some doubt is cast by References 2 and 5 since, according to a print dated 1737, there were six or seven shops Under St. Dunstan’s Church, of which the westernmost shop was immediately under the Dial. 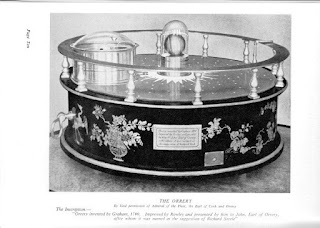 John Rowley1,2,5#507: Mathematical instrument maker of London. He was freed of the Broderers’ Company in 1690, and worked in Threadneedle Street, London until 1702 when he is recorded as trading at The Globe, Under St. Dunstan’s Church, Fleet Street. This, according to the authors, is likely to be the same address as Under the Dial of St. Dunstan’s Church, previously vacated by John Worgan. Instruments bearing John Rowley’s name include drawing instruments, pocket dials, artillery scales, dialling spheres, Gunther’s quadrants, globes, planetaria, levels, sextants, and a standard length. He also played a major role in the development of planetary system models, known as orreries. Many instruments bearing John Rowley’s name were to be found in the collection of Charles Boyle, fourth Earl of Orrery (1676-1731), which he bequeathed to Christ Church, Oxford. John Rowley was succeeded in business by his ex-apprentice and employee Thomas Wright. 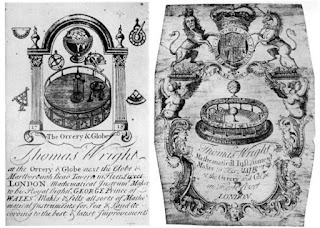 Thomas Wright1,2,6#143: Mathematical instrument maker of London. He served his apprenticeship with John Rowley, and was freed of the Broderers’ Company in 1715. He started his career working for Rowley, and by 1720 he was trading at the Orrery and Globe, Fleet Street, having succeeded John Rowley in business. According to the authors ‘In the midsummer quarter of 1718 Wright moved to what later became No. 136 Fleet Street, opposite Water Lane, where he continued to work under the sign of the Orrery and Globe until his retirement in favour of Benjamin Cole in 1748…’ According to Reference 2, his address in 1747 was Orrery & Globe next the Globe & Marlborough Head Tavern in Fleet Street. It is entirely possible, and indeed likely, that The Globe, the address occupied by John Rowley’s business, was renamed Orrery & Globe following Rowley’s involvement in the development of orreries, and the existence of many of his instruments in the Earl of Orrery’s collection. Thomas Wright was succeeded in business by his employee, Benjamin Cole.


John Troughton1,2,3,4 (c1739-1807) served his apprenticeship with his uncle, also named John Troughton, and was freed of the Grocers’ Company in 1764. Among his own apprentices was his brother, Edward Troughton. They traded together as J&E Troughton, and in 1782 John purchased the business of Benjamin Cole (II), and began to trade from the same address At the Sign of the Orrery, 136 Fleet Street. 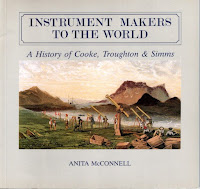 As mentioned earlier, not all of the claims or implications made in At the Sign of the Orrery are verifiable. By way of correction, or errata, Anita McConnell4 points out there is not a proven connection between either John Worgan or John Rowley and the Troughtons. Also that the claim on p27 that the King of Denmark awarded a ‘Special Gold Medal’ to Edward Troughton has not been verified. And finally she points out that William Simms was not apprenticed to Bennett, as stated on p31.

For an account of the lives and careers of the instrument makers mentioned in this article, and many more, please see Reference 1.

1: Brass and Glass: Optical Instruments and Their Makers. Tony Benson. 2021.

All content is © copyright Tony Benson. Images may be subject to copyright.