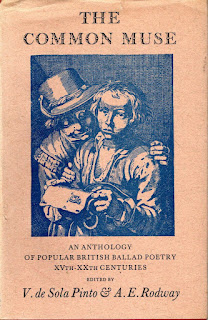 You may remember from my earlier blog posts that Francesca loves to collect old books of ballads and songs. In fact, with all the necessities of life taken care of, and book collecting as her only real hobby, it’s all she has to spend her allowance on. It’s unsurprising that her collection contains numerous old and very interesting books.

Today, Francesca is browsing The Common Muse: An Anthology of Popular British Ballad Poetry XVth – XXth Centuries. Edited by V. de Sola Pinto & A.E. Rodway. This first edition was published by Chatto & Windus, London in 1957. The objective of the editors was given on the front flyleaf of the dustjacket. The dustjacket is missing from many copies of this book, so I have reproduced the editors’ objectives below for you (click to enlarge it). From this, you would expect the book to contain a wealth of old popular poetry, songs and ballads, and you would not be disappointed.

There is a 29-page introduction, which begins with the words: ‘Though many of our greatest poets knew, used and imitated street songs and ballads, in modern times it is mainly the political and social historians and antiquaries who have so far paid serious attention to them. Literary critics and historians dismiss them as “doggerel” or “journalism in verse”. What was good enough for Shakespeare, apparently, is no longer good enough for us.’

The introduction goes on to give a critical analysis of the genre of songs and ballads in poetry from mediaeval times to the 20th century. The authors discuss varying perceptions of the literary and moral value of these works, at the same time highlighting the wide range of subject and style, from bawdy to romantic, from historical to social commentary. They acknowledge that while the preservation of mediaeval verse can be attributed to broadsheet1 publications, they also owe a debt to ‘folk memory’, since the earliest songs and ballads were composed and sung by minstrels, many of them itinerant, and passed on by word of mouth rather than printing. The critical analysis is an engaging read for anyone with an interest in this kind of poetry.

Following the introduction, the book is structured in two parts. Part I: General has subsections Historical; Social Criticism; Manners and Fashions; Soldiers, Sailors, Highwaymen and Poachers; Portents and Prodigies; Crime and Punishment; Religion. Part II: Amatory has subsections Rural; Urban; Vocational; Clerical; Marital; Wise and Foolish Virgins. As is apparent, this collection contains a rich variety of interesting songs and ballads. Each subsection is prefaced by a delightful woodblock print, and contains a number of songs or ballads. 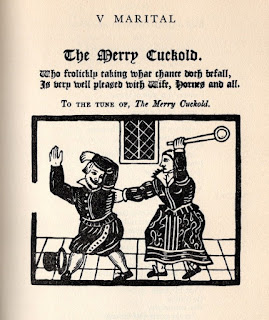 After browsing for a while, Francesca finds herself reading a song called Don’t Be Foolish Pray.

Young Hodge met Mog the miller’s maid
Who long his suite denied,
And half inclined and half afraid,
Scratched his rough head and cried:-
‘Now Molly while I love you so,
Why still our joys delay,
Come dang it, to the parson go,
And don’t be foolish pray.’

Sweet Moggy with an artful blush
That sham’d the rose’s hue,
Looked round, and cried to Hodge ‘hush hush
Speak softly, softly do:
We shall be overheard I know,
The mill don’t work to day
Be quiet, Hodge my hand let go,
Now don’t be foolish pray.’

Poor Hodge, thus chid, at a stand,
And cried,-‘Well then, good bye,
I’se go to give to Sue my hand,
Since thee do cast off I.’
‘Me cast you off’, cries Moggy ‘no,
The mill don’t work to day;
And so dear Hodge, to church let’s go,
And don’t be foolish pray.’

Francesca rather likes the idea of a blush that shames the rose’s hue, but she’s not quite sure of the wisdom behind Molly’s initial refusal of Hodge’s hand. Perhaps Molly is toying with him. Would Francesca do such a thing herself? She doesn’t really want to have to answer that question. 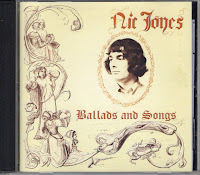 The song was recorded by the brilliant folk-singer/guitarist Nic Jones on his album Ballads and Songs in 1970. If you’re not familiar with his work I highly recommend you get the album for this, and the other wonderful songs and ballads on it. As a tune for this song he used a part of the tune The Merry Merry Milkmaids from The Dancing Master by John Playford (published in a number of editions from 1651 to about 1728). He also altered the words a little to scan with the tune.

In the sleeve notes for Ballads and Songs, Nic Jones wrote, ‘The printed broadsides are often accused of stunting the growth of folksongs and of solidifying the words by submitting them to print. True as this is in many cases, they also created and diffused a great many songs which possess a deal of charm in themselves. Don’t you be foolish pray is a good example of this, probably created by a townsman with his idealised view of rural life. In many instances, songs such as this appealed very strongly to the country singers and were allotted high positions in their repertories.’

1: According to the Oxford English Dictionary, the words broadsheet and broadside both refer to a large sheet of paper printed on one side only. These were used to publish ballads and songs, as well as news items and advertisements, and sold by street vendors, particularly in the Elizabethan age, but continuing until the nineteenth century.