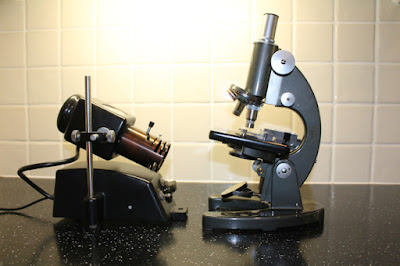 Köhler Illumination is a form of microscope sample illumination, invented by August Köhler, (see below), that provides even light across the field of view, and a light cone that matches the numerical aperture of the objective lens. It is suitable for either viewing or photography. It normally consists of a collector lens near the light source, together with a field iris, and a sub-stage condenser with a condenser iris. The focus of both the collector and condenser lenses is adjustable, as is the aperture of each of the irises. 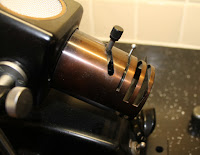 The Cooke microscope light you see here has both an adjustable collector lens (the big lever pointing straight up), and an adjustable field iris (the small lever you see further to the right). You can click on the image to see it enlarged.

It also has a knob to adjust how bright the light is, and slots where filters can be inserted. This particular model of light is designed by Cooke to be used with a Cooke microscope, but it can easily be used with any conventional microscope. 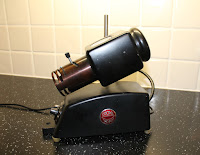 Some microscopes have built-in Köhler illumination. In this case, the principle is the same, but the practicalities of the adjustments may be different.

August Köhler, (1866-1948), was a German scientist who made several innovations in microscopy. He is best known for his invention of Köhler Illumination in 1893. In 1900 he began to work for Carl Zeiss, where he continued to work until 1945, three years before his death.