Book Review: The Day Without Yesterday by Stuart Clark

Once we recognise our limits, we can leap beyond them. 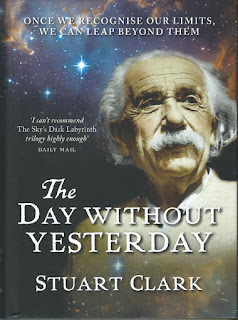 This is the third in Stuart Clark's trilogy, including The Sky'sDark Labyrinth, and The Sensorium of God. Each takes a pivotal moment in the evolution of science and dramatises it in fiction.

From The Back Cover

Berlin, 1914. Europe is marching blindly into war and the city is a storm of nationalist fervour and army recruitment.

Albert Einstein anticipates the carnage to come when his university colleagues begin to work on poison gas to 'shorten the war'.

Increasingly isolated, he finds that few people entertain his outlandish new way of understanding the universe, and he can't quite pull the mathematics together.

He needs hard evidence to prove his vision, but the man he was relying on to help him is caught by the outbreak of hostilities and is now facing execution.

Meanwhile, in the mud-soaked trenches of the Western Front, unbeknownst to Einstein, a devoutly religious Belgian called Georges Lemaître has the mathematical ability to help bring his new theory to a triumphant conclusion. But as the German war machine advances, Lemaître's survival looks increasingly unlikely…

The Day Without Yesterday by Stuart Clark

This is an excellent book, and a fitting conclusion to the Sky's Dark Labyrinth trilogy.

With this book, Dr. Stuart Clark has taken on a huge challenge. We all know something of Albert Einstein, and while many readers may not know much about his personal life, we all have a pretty good idea that he was one of, if not the, most influential scientist in modern times. The advances he brought about in science have made him universally admired and respected. But what was he like as a person? What sort of a life did he lead?

These are the questions Dr. Clark sets about answering in this book. The Day Without Yesterday is the story of Einstein's life around the time of the First World War, and tells of his family life, his relationship with other members of the scientific community, and the impact on himself and others of his ground-breaking theories.

The Day Without Yesterday is clearly well researched, and sensitively written by an author who is himself a scientist. He brings Einstein and those around him to life, and furnishes us with a taste of Einstein, both at his best and at his worst.

So, going back to my questions: What was he like as a person? What sort of a life did he lead? If you read this immensely enjoyable book, you'll find out.

Stuart Clark's website is www.stuartclark.com, where you will find more information about his writing, fiction and non-fiction, his journalism and much more.