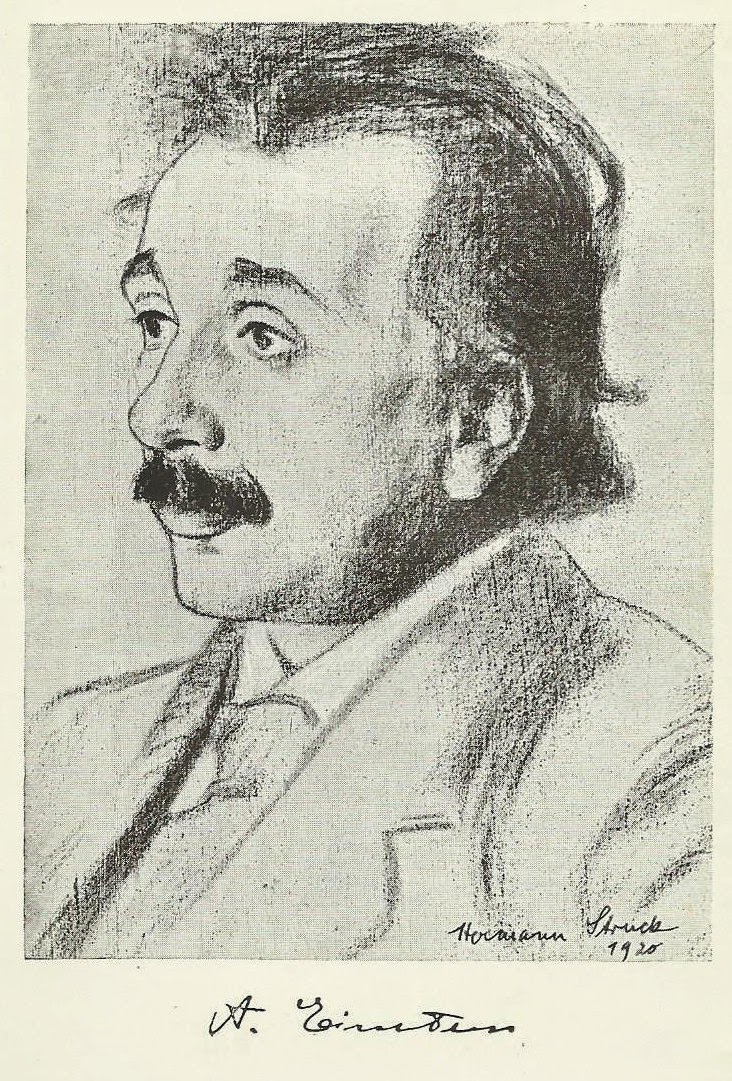 Relativity – The Special and The General Theory. A Popular Exposition.

Anyone who reads or writes science fiction gets caught up in relativity some time or other, whether it is with faster than light travel, warp drives, time travel, wormholes, the bending of space and time or any of a number of other fun concepts. Wouldn't it be nice to actually know some of the real theory behind all of this? Some people are put off reading about the subject because much of what is written is heavily mathematical. Worry no more. This book by Albert Einstein himself is aimed at those who want to understand the concepts but don't want to get bogged down in mathematics.

I have just re-read this book, and just like the last time I read it some twenty years ago, I am both impressed and grateful that a man of such awe-inspiring intellectual prowess took the trouble to explain this complex subject to me. It's almost as though he is in the room talking to a non-mathematician, and gently, one step at a time, starting with the fundamentals, building up the ideas that make this impressive set of theories.

I thought to tell you what the book is and who it is aimed at, but I cannot put it better than Albert Einstein's own words in his preface of December 1916.

“The present book is intended, as far as possible, to give an exact insight into the theory of Relativity to those readers who, from a general scientific and philosophical point of view, are interested in the theory, but who are not conversant with the mathematical apparatus of theoretical physics. The work presumes a standard of education corresponding to that of a university matriculation examination, and, despite the shortness of the book, a fair amount of patience and force of will on the part of the reader. The author has spared himself no pains in his endeavour to present the main ideas in the simplest and most intelligible form, and on the whole, in the sequence and connection in which they actually originated. In the interest of clearness, it appeared to me inevitable that I should repeat myself frequently, without paying the slightest attention to the elegance of the presentation. I adhered scrupulously to the precept of that brilliant theoretical physicist L. Boltzmann, according to whom matters of elegance ought to be left to the tailor and to the cobbler. I make no pretence of having withheld from the reader difficulties which are inherent to the subject. On the other hand, I have purposely treated the empirical physical foundations of the theory in a "step-motherly" fashion, so that readers unfamiliar with physics may not feel like the wanderer who was unable to see the forest for the trees. May the book bring some one a few happy hours of suggestive thought!” 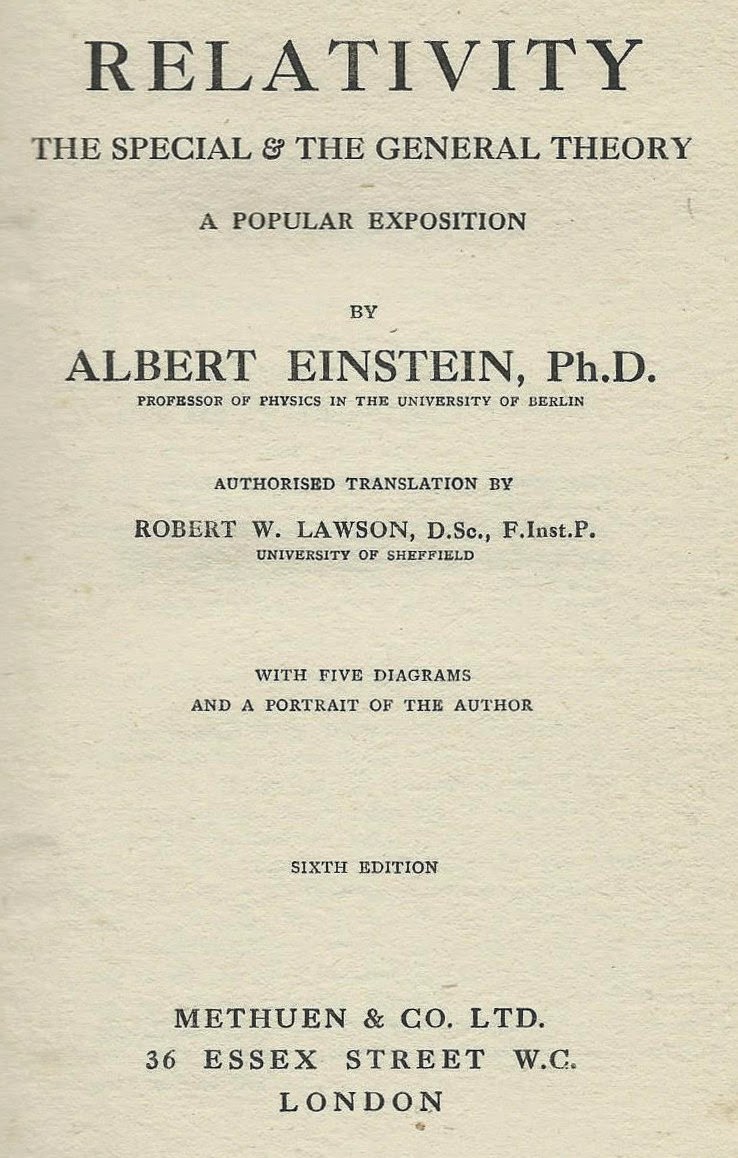 The book is written in 32 short chapters, most of which are less than four pages in length. The chapters are bite-sized chunks, and each adds a new step in understanding of the theory. The chapters are organised into three parts and three appendices:


Part I The Special Theory of Relativity

One of the great things about special relativity is you can understand it with no more than high school mathematics.

Einstein is rigorous in his approach, and argues that any definition that cannot be verified by measurement is meaningless. He begins with what he calls “the Principle of Relativity (in the restricted sense)”, which states:

If, relative to K, K' is a uniformly moving coordinate system devoid of rotation, then natural phenomena run their course with respect to K' according to exactly the same general laws as with respect to K.

He then goes on to use an example of a railway train moving relative to the embankment to show that the above principle of relativity is in conflict with the statement that the speed of light is a constant in vacuum. He concludes that we must either abandon the so-called “Principle of Relativity (in the restricted sense)” or the assertion that the speed of light in vacuum is constant – or we can develop a theory that reconciles the two. That theory is the Special Theory of Relativity.

The argument of the text then proceeds towards a derivation of the Lorentz transformation. At this point he states its mathematical representation, and refers the reader to Appendix I if they want a derivation.

This is all well and good, but it only applies if we constrain ourselves to uniform rectilinear and non-rotary motion, and that's what brings us on to Part II.

So, what if we remove this last constraint, and don't limit ourselves to uniform rectilinear and non-rotary motion?

Einstein argues that gravity acts by means of a gravitational field, and that the law governing the field must be a “perfectly definite one.” With consideration, he concludes that “the same quantity of a body manifests itself according to circumstances as 'inertia' or as 'weight'”. This leads to the conclusion that an observer, given no other clues, cannot tell the difference between a downward gravitational field and an upward uniform acceleration. 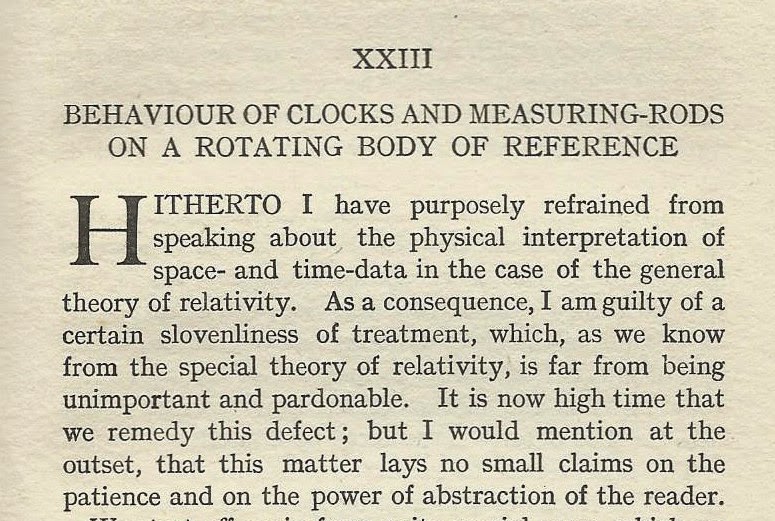 He goes to some trouble to demonstrate how space-time might be conceived this way. The space-time continuum of the General Theory of Relativity is not a Euclidian continuum, so instead we use four dimensional Gaussian coordinates.

Following on from this he describes space-time using a non-rigid reference body, moving and altering form in any way, and in which the time, measured at indefinitely close points, vary by indefinitely small amounts. He refers to this reference body as a “mollusc”.

I have necessarily abbreviated the description so far, and in so doing, I have probably made it sound either hokey or nonsensical. Reading this book will show that to be a shortfall of my description rather than Einstein's explanation. He goes on to formulate the General Principle of Relativity using a non-mathematical description. It would be pointless for me to attempt an abbreviated statement of his case, since his words are already just that, and presented without the aid of mathematics. The interested reader should certainly read Einstein's words.

It's fair to say that in Part II, Einstein explains the general theory of relativity reasonably well, considering that he is avoiding the mathematics, and attempting to convey the concepts to an educated layman.

The rest of Part II, and a short Part III

The rest of Part II and a short Part III offer interesting discussions of how the General Theory of Relativity helps with, for example, explaining the following:

The 43 arcsecond per century discrepancy between the observed orbit of Mercury and the predictions of classical mechanics.

The existence of a universe that is finite yet unbounded.

The structure of space. Given that the behaviour of measuring rods and clocks is influenced by gravitational fields, the distribution of matter cannot be described using Euclidean geometry with complete accuracy. He explains what the General Theory of Relativity tells us about the structure of space.

I sincerely hope I haven't managed to make this work sound either dry or too difficult to read. It is elegantly written, and well explained. He doesn't introduce any concepts without explaining what they mean, and in the end, the reader cannot but have an appreciation of the wonders of the special and general theories of relativity.
Posted by Tony Benson at 13:00