Today I have author Jo Jenner as a guest to tell us about her experiences with the Introduction to Forensic Science course, offered by the University of Strathclyde via FutureLearn. FutureLearn is a part of the Open University, and offers free online courses, delivered by various universities, in many different subjects. Jo Jenner is an author who regularly blogs at jojenner.blogspot.co.uk or you can catch up with her on twitter @jojenner40 or on facebook www.facebook.com/#!/jojennerauthor
Here's Jo...
Sitting at my desk drumming my fingers looking for inspiration, or procrastinating, as I believe the professionals call it, I stumbled across Future Learn and their plethora of on line courses or MOOCs. A MOOC is a massive open online course and is aimed at unlimited participants from anywhere in the world.
What better way to avoid writing my crime novel than spending six weeks following an introduction to forensic science. The main selling point was that the course could be completed with as little as three hours study per week. I completed the course with slightly less than that. Did I enjoy it? Yes. Did I get the most out of it? No.
The course was a mixture of videos, audio commentaries and links to articles that could be read to enhance and expand the course. Each week followed a specific topic with the first and last weeks being more of an overview. The course also had a case study which was based upon a real case. This showed how the evidence was gathered and then used to reach a conclusion as to who had committed the murder of a young woman in Scotland.
There was a week looking at fingerprints, or fingermarks as they are sometimes called, a week looking a DNA, one looking at drugs and their abuse and one looking at firearms. At the end of each week there was a pop quiz which was actually quite taxing and did mean that you had to have paid attention to the information you had been given.
I took this course from the point of view that I am writing a crime novel and I am an avid CSI fan. The overview it gave me was great and meant I now know where I am going wrong when I write something but not necessarily why. The extra reading helped to make the course accessible to people of different levels of competence. The chat rooms were very busy and it did give you a chance to understand the different laws within other countries.
I had two niggles. Firstly, two or three times there were live chats which I couldn’t attend because they were in the middle of the working day and this meant I missed out on that part of the learning experience. The second was I would have liked a little certificate to say I had sat this course, and I can get one. But first I must sit an exam and this will cost me £119. There are sixty one test centres in the UK and there is actually one within ten miles of where I live, but I am guessing I am one of the lucky ones. The other thing is I can’t see what value this certificate has. It doesn’t appear to carry any academic weight but on the basis I don’t need it, I haven’t bothered finding out it’s worth.
So, on the whole, a great little course with educated me in the facts behind the TV shows. I have already signed up for the next forensics course. Weirdly though the next course is run by Leicester University and the first was run by the University of Strathclyde. Hopefully they will not be going over old ground but I doubt they will have had time to adjust their course based upon feedback received from the introduction course.
Future Learn is a great way to access free online education but at the moment the courses seem to vary vastly in their content and enjoyability. Hopefully the great courses will quickly squeeze out the not so good and as it’s free why not pick a course that sounds fun and give it a go.
Jo Jenner regularly blogs at jojenner.blogspot.co.uk or catch up with her on twitter @jojenner40 or on facebook www.facebook.com/#!/jojennerauthor
The FutureLearn course 'Introduction to Forensic Science' was delivered by the University of Strathclyde from 6th Jan to 16th Feb 2014, and and the lead lecturer was Professor Jim Fraser who is Director of the Centre of Forensic Science.
Posted by Tony Benson at 10:19 5 comments: 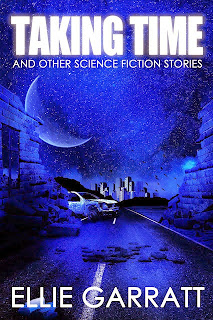 From the Back Cover

A collection of dark science fiction stories, where time and space are not always as they first appear to be.

The future of humanity must be decided in Next Phase. Winning the Planetary Lottery is not as lucky as it first seems in Schrodinger's Gamble. An apocalypse and its aftermath threaten to tear one couple apart in Daiker's Children. In Life As I Know It a reclusive man finds both his heart and home invaded during an alien harvest. In Taking Time a vampire seeking shelter on a distant planet finds himself facing a very different kind of demon, after answering a frontier settlement's plea for help.

Stories range from flash fiction to novelette in length.

This is Ellie Garratt's second collection of short stories, and after enjoying her first collection so much I had high expectations of Taking Time. I wasn't disappointed. There is a shift in this collection both towards science fiction, and towards longer stories.

Once again, the author is taking you somewhere completely different, and she's come up with a selection of original and entertaining stories. There are five stories included in this collection, and every one of them left me with something new to contemplate.

Each story will prey on different fears or moral dilemmas, delve into different parts of your mind, and with every one Ellie Garratt strikes a chord. Whether or not you are a science fiction fan, you will be drawn into these beautifully written, clever and thought-provoking stories. 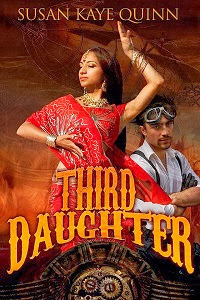 The Third Daughter of the Queen wants her birthday to arrive so she'll be free to marry for love, but rumors of a new flying weapon may force her to accept a barbarian prince's proposal for a peace-brokering marriage. Desperate to marry the charming courtesan she loves, Aniri agrees to the prince's proposal as a subterfuge in order to spy on him, find the weapon, and hopefully avoid both war and an arranged marriage to a man she does not love.

Third Daughter is the first book in the The Dharian Affairs Trilogy (Third Daughter, Second Daughter, First Daughter). This steampunk-goes-to-Bollywood (Bollypunk!) romance that takes place in an east-Indian-flavored alternate world filled with skyships, saber duels, and lots of royal intrigue. And, of course, kissing.

This book is billed as 'steampunk-goes-to-Bollywood (Bollypunk!) romance', so what exactly is it? The author fuses carriages, steam trains, airships and clockwork with the rich eastern culture that underlies Bollywood storytelling, and together with royal intrigue, treachery, love and romance she combines the rich clothes and lush settings of court life with adventure in far off places. Everything is there, and the story cracks along at a pace which kept me gripped.

Aniri is faced with a dilemma. Should she follow her heart or do what is expected by the Queen, her mother. Indeed, what the Queen asks of her is no less than to secure the future security of the kingdom. The plot twists leave no-one unscathed, and we wonder just who can be trusted.

Aniri, is a plucky young lady, full of adventure and love. She has her flaws, though, and the result is endearing. If you enjoy a gripping, tense plot, lush settings and plenty of intrigue then this book is for you. I thoroughly enjoyed it, and very much look forward to the next book in this series.

You can find Susan Kaye Quinn at www.susankayequinn.com where you will also find purchase links.

Analyzing The Universe - Blow by Blow 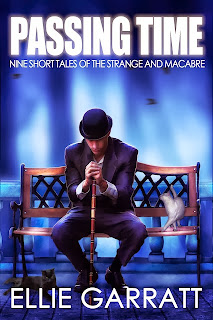 Nine dark fiction stories that may just give you nightmares. Dare you enter the world of the strange and macabre, where the passing of time is not always as straightforward as it seems?

A man lives to regret Passing Time. A father will do anything to save his son in Expiration Date. An author finds out her worst nightmare is back in The Devil’s Song. A woman gets more than the claim fee when she takes out vampire insurance in Luna Black.

In Dining in Hell, the Death Valley Diner becomes the wrong place to stop.

A serial killer adds another file to his collection in The Vegas Screamer. In Eating Mr. Bone, an undertaker could meet an unfortunate end. A con man meets his first ghost in Land of the Free, and will truth finally be set free in The Letter?

Nine stories originally published between 2010 and 2011. Stories range from very short to novelette.

Passing Time: Nine Short Tales of the Strange and Macabre

I only occasionally dip into short stories, preferring to get stuck into a full length novel rather than skip from story to story. However, when I do venture into the shorter, I sometimes come up trumps, and this book is one of those occasions.

The first thing that strikes me as a lover of books is the quality of the publication. I only wish all publishers would set such a high standard. Everything from the cover design to the internal formatting are a high quality showcase for the high quality writing it contains.

It is, as the subtitle suggests, a collection of nine short stories, and they certainly live up to their billing as strange and macabre. I have to say that the author has come up with some wonderfully twisted and bizarre ideas, all of which are executed in a thoroughly engaging style.

These are memorable stories. I highly recommend this book to any reader, and look forward to more from the same author.