I'm pleased to have author Mary Pax here today with a guest post in which she talks about patience and perseverance. Mary has a fantastic blog, and today you'll find me over there talking about what authors read. Mary is a successful author publisher, writing science fiction and fantasy for her growing and very happy audience. Over to you, Mary...

Patience and Perseverance
The author gig is tough. It’s filled with a lot of downs and a lot of ups. Don’t ride it alone. Don’t ride it without a plan to keep moving forward.
I really stink at patience. My husband and most people who know me in person will tell you that. What saves me is that I’m extremely driven, ambitious, stubborn, and tenacious.
My first foray into publishing was two and a half years ago. I published three short stories and gave them away for free. People I didn’t know read them and sometimes left great comments [sometimes not so great comments]. The good comments kept me going and onward I went.
I published the novelette, Semper Audacia two years ago. It was my first venture to earn some money. It sells maybe three copies a week. Funny thing happened over the summer. I was contacted by a publisher who wanted to put Semper in an anthology. I agreed, they paid me. Space Jockey happened and sells better than my story does on its own. It’s great exposure.
Then I readied my space opera series, The Backworlds. The first novella is perma free. It takes a beating, but keeps on ticking and keeps sales of the sequels going at a steady pace. The crap it sometimes takes used to really bother me. It wasn’t until recently I was able to let it go and make peace with it. It sells my other books. That’s all that matters. And I still think it’s a damn fine book.
Stopover at the Backworlds’ Edge came out very shortly after. A real bargain at $1.99. It was my plan to lure my audience in. The steady sales and fan mail keep me publishing the series and now has my writing supporting itself.
I noticed when I released Beyond the Edge [Book 4] earlier this month that sales of all the series books picked up. Awesome.
All is not Star Trekathons and pumpkin ale in my publishing universe. The Renaissance of Hetty Locklear, which I published a year ago, remains my problem child. It has yet to catch on like the Backworlds series did. So I decided not to write anymore in that series for the time being.
And my Husband Unit will attest to how much whining I did this summer over slow sales. They weren’t really slow. I wanted more [my impatience].
Here I am doing what I’ve dreamed to do with my life – writing books. And it’s awesome. I stuck that on my wall, and I stare at it on crappy days. I’ve published five books, a novelette, and have been in two anthologies so far. Doing what I love is far from crappy even on a day full of crapitude.
Why are you doing this?

M. Pax-- Inspiring the words she writes, she spends her summers as a star guide at Pine Mountain Observatory in stunning Central Oregon where she lives with the Husband Unit and two demanding cats. She writes science fiction and fantasy mostly. You can find out more by visiting her at:
Website / FB / Twitter / Goodreads / Pinterest / Wattpad 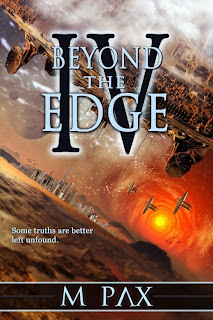 Some truths are better left unfound.
For two years Craze’s dear friend, Lepsi, has been missing. The murmurings of a haunted spaceship might be a message and may mean his old pal isn’t dead. The possibility spurs Craze and Captain Talos to travel to uncharted worlds, searching. Out there, in an unfamiliar region of the galaxy beyond the Backworlds, they stumble upon a terrible truth.
Meanwhile, Rainly remains on Pardeep Station as acting planetlord, dealing with the discovery of her lover’s dark and brutal past. Alone and questioning her judgment, her introspection unlocks more than heartache. Latent protocols in her cybernetics activate, forcing her to face a sinister secret of her own.
In the far future, humanity settles the stars, bioengineering its descendents to survive in a harsh universe. This is the fourth book in the science fiction series, The Backworlds. A space opera adventure.
Amazon / AmazonUK / Nook / Smashwords / Kobo / Other Outlets