We picked our blackcurrants a few weeks ago, and those we didn't use at the time have been in the freezer ever since. That's all very well, but it's about time I put them to good use, so I'm using Dominic's recipe to make some Blackcurrant Vodka. Here it is: 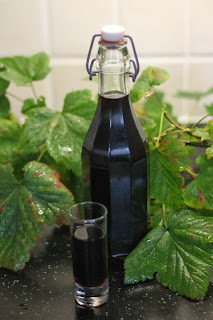 Blackcurrant Vodka
Ingredients
1 Bottle vodka (75cl)
12 oz Blackcurrants
6 oz Sugar
Method
Mash the blackcurrants and transfer all the juice and pulp, together with the vodka and sugar, into a closeable glass or plastic container, large enough to hold all the ingredients. A bottle, demijohn, large soda bottle, etc. is suitable. Note, the mixture won't fit in the original vodka bottle, but keep the bottle for the finished product.
Shake repeatedly until the sugar is dissolved. Place the container in a cool place away from direct sunlight. Shake every day for the first week, then leave until it has been kept for two months. At the end of two months decant the liquid and, if necessary, filter it. This is now ready and can be put back into the original vodka bottle. Drink any that won't fit.
As a bonus you now have some blackcurrant pulp that is steeped in vodka. It makes rather a nice dessert with ice cream.
Dominic loves to give Francesca little presents when he visits. He sees it as a small compensation for the oppression of her captivity. Francesca is not allowed alcohol, but she does love blackcurrant vodka, so Dominic smuggles it through the inspections on the way in.
Enjoy your blackcurrant vodka, but whatever you do, don't do what Francesca did at the Autumn Ball.
Dominic and Francesca are characters in An Accident of Birth. The recipe is real.
Posted by Tony Benson at 09:21