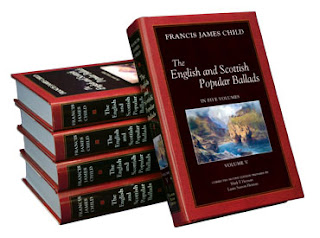 Mark Heiman and Laura Saxton Heiman of Loomis House Press have now completed publication of the first new (non-facsimile) edition of Francis James Child's collection The English and Scottish Popular Ballads, completely re-set and edited to include all of Child's post-publication corrections and additions, including 77 additional ballad texts.

In today's post, I interview Mark Heiman, who has generously agreed to offer a hardbound copy of the latest volume to the winner of a draw. More on that after the interview:

Mark, thank you for agreeing to this interview. Some readers may not be aware of Loomis House Press. Could you tell us a little about your publishing objectives.

We founded Loomis House Press in 2001 in recognition of the many core ballad and folklore texts that were no longer available in print — Child being foremost of those. The world has changed somewhat since then, with the availability of digitized holdings from libraries around the world, but we’d like to hope that there are still people who value having some of these titles in hand and on the shelf.

For a long time the Child Ballads were only available as second hand books, often at high prices, but more recently the facsimiles of the first edition have become available again. Why did you choose to produce a second edition of the Child Ballads?

Well, you’d somewhat answered your question. Child was out of print, and used copies were going for exhorbitant prices, unless you were lucky enough to find an old Dover volume on a back shelf in a used book store. Those bookstores had only begun to sell online in small numbers in 2001, so gathering a complete set of Child took a lot of dedication and/or money.

Without a new edition of Child, the likelihood of a new generation of ballad singers and scholars discovering this work seemed remote, and that’s just a shame. For better or worse, Child is the foundation on which all subsequent ballad scholarship and collecting has been built. His 19th century academic prose can seem daunting at first, but persistence is repaid by the breadth and depth and even the wit of his work.

Producing this new edition must have been a massive task. What particular challenges did you face?

The original edition of The English and Scottish Popular Ballads was published in ten volumes over 15 years, from 1883 to 1898, and over that time Child continued to discover new ballad variants, to find better manuscripts of some of his sources, and to develop his understanding of the materials he was working with. As a result, each of those ten volumes contains a lengthy section entitled Additions and Corrections, where Child notes things that should be added to or corrected in each of the preceding volumes. The final volume contains new material for the entire set, including some corrections of prior corrections!

What we set out to do was to carefully carry out the instructions represented by this supplemental material, inserting new texts where indicated, correcting or expanding ballad notes, etc. In order to do that, we had to first create a new digital text of the books, working from an original first-edition set. If we’d started ten years later, now that several public domain texts have been generated, we could have saved many hours of tedious proofreading!

One of the largest challenges, and one we didn’t really recognize at the outset, has to do with page numbers. The original final volume contains a number of indices and an extensive glossary, all of which obviously refer to the original pagination. Many of those references are to text in the Additions and Corrections — text that we have subsequently scattered through five volumes. Identifying the correct new pagination for all of those references was a huge project; it ultimately involved creating software to track the location of repositioned references and dynamically generate new index references. That’s why Volume 5 took as long as it did…

Now that all five volumes are complete and available, what new projects do you have in the pipeline?

We’ve got a long list. As you probably know, we paused between volumes 4 and 5 to bring out a facsimile of Bronson’s Traditional Tunes of the Child Ballads; that had been on the list from the beginning, but we were able to acquire the rights at that point in time, so it was well worth taking a little time just then to bring those books out.

At the moment, we’re preparing a fascimile edition of Sharp’s two volume English Folksongs from the Southern Appalachians, another absolutely foundational source for ballad texts and tunes that has long been unavailable.

Also on the near horizon are some online projects — we now have this digital, corrected, highly structured representation of Child’s collection that should be able to serve as the foundation for an amazing online “Child Explorer.”

On a personal note, have you always been in the publishing industry, and what is your interest in the Child Ballads?

I had worked as a writer and editor, and had been doing freelance book design for a number of years before we founded Loomis House, so it wasn’t a big leap. My interest in Child goes back to when I first stumbled across Child (and Bronson) as a teenager, and I’ve been singing ballads ever since, and more recently, giving performance/lectures about Child and the ballad tradition.

Mark has generously offered a hardbound copy of the latest volume, including shipping, to the winner of a draw. To enter this draw, all you have to do is post on your blog to tell your readers about this interview and give-away. Leave a comment on this post to let me know where I can see your post and you'll be entered in the draw. I will pick a winner, on 20th September - two weeks from the date of this post, at random from the entries and notify the winner, who can then contact Loomis House Press to arrange delivery.

Please do support Mark and Laura's work by posting a link to this post on your blog, Twitter, Facebook, Google+ or anywhere else. Thank you.
Posted by Tony Benson at 05:41 21 comments: