I am in the process of editing my work in progress, and at the moment I am having fun taking out my inappropriate uses of passive voice. In doing so I have had to clarify my thoughts on this subject, so I decided to write them down. I hope my thoughts on this will be of some interest to you.

What is passive voice?

The toast was burned.

The latter phrase is in passive voice. This phrase removes the emphasis from the performer of the action, Roger, and places it on the object of the action, toast.

Finite form of to be + past participle = passive voice

What is not passive voice?

There are some common misconceptions about passive voice. One of the most common relates to the use of the past progressive (otherwise known as past continuous) form. This is a phrase containing was or were followed by the present participle.

Consider the example: The toast was burning.

This is active voice. It is the past progressive form, and the verb burning is the present participle. This is generally recognised as the form ending in “ing”.

The past progressive form is used to indicate one of the following:

An event during a continuous action. Event a happened while action b was happening. I stopped work when you were making dinner.

Creating atmosphere. In the pub the landlord was washing glasses. Several people were playing cribbage while others were drinking or talking.

In order to put this passage into passive voice I would say: In the pub the glasses were being washed. Cribbage was being played and there was drinking and talking.

Clearly this is a much weaker way of writing the passage.

Why is the use of passive voice frowned upon?

The principle reason passive voice is frowned upon is because the statement is weakened by the loss of emphasis on what or who is carrying out the action. In our first example:

We know exactly what happened. When placed in passive voice:

The toast was burned

We lose a key piece of information about the event. This weakens the statement.

Why is the use of passive voice sometimes the right approach?

I have breakfast at the hotel restaurant, and when it arrives it is poorly prepared. At this point my narrative may say:

The toast was burned and the eggs overcooked.

The obvious fact that someone in the kitchen did this need not be stated. Indeed, the reader would be frustrated by the irrelevance if the author told them it was a cook called Roger.

Such use of passive voice is not only acceptable, but it can be preferable to the active voice alternative.
Posted by Tony Benson at 05:30 21 comments:

I'm back - and it's Book Blurb Friday

Margo and I have had an amazingly busy time lately, and a part of that has been family health issues. I'd like to thank everyone who's sent their well wishes, and I'm happy to be able to say that things are looking up now. The health issues are much improved and no longer frightening. Good news indeed! Thank you all for your kind thoughts.

We'll be around a little more for a couple of weeks, as our schedule is allowing us a little bit of a life for a while.

Breathes a sigh of relief

The Book blurb Friday is hosted by the fabulous Lisa Ricard Claro over at Writing In The Buff. Please do visit her excellent blog. This week's book blurb is for this photo: 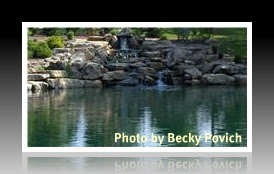 Solomon didn't know he had unusual powers until he discovered the place that unlocked those powers. As an accountant with a wife, two sons and a dog, with an executive house in suburbia he had always considered himself to be an ordinary sort of person.

Solomon rarely ventured far from his home or work, but one day he was out walking the dog and found his usual path obstructed by municipal works. He took a different path, and was soon in the grounds of a derelict manor house. Coming across a pool he sat watching a rocky waterfall while his dog paddled in the water. When the dog vanished and a beautiful woman walked out of the water towards him he just knew he had turned his darkest desire into reality, and at that moment his life changed in ways even he wouldn't have imagined.

Please check out the other entries for the book blurb. There is a linky to them all here.
Posted by Tony Benson at 00:04 21 comments: